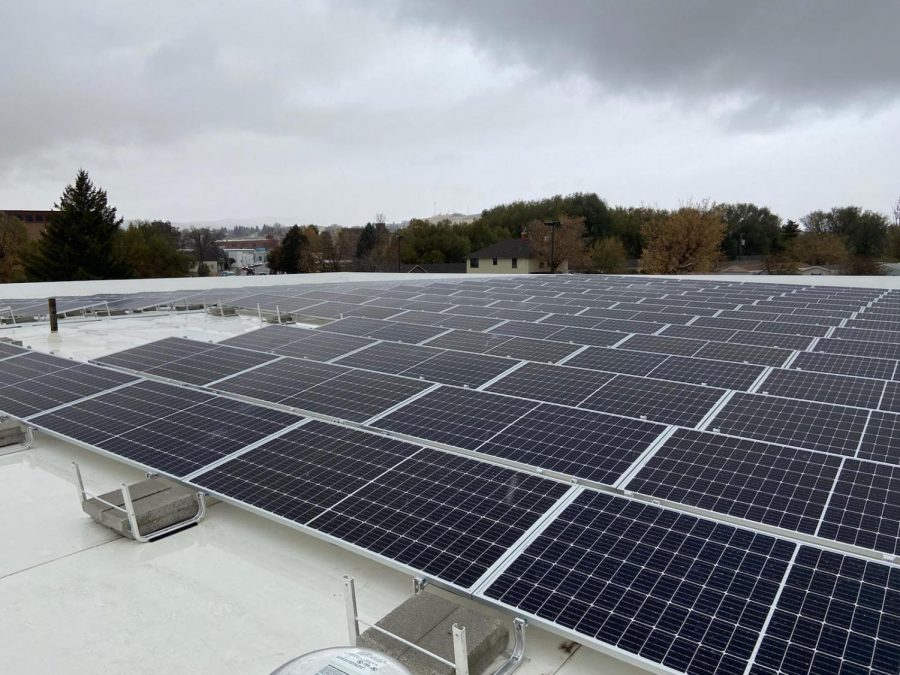 The solar panels installed on the PHS roof this year were made possible through a variety of grants coordinated by the PHS Green Initiative club.

In 1941, Russell Ohl utilized Alexandre Becquerel’s discoveries on solar energy to create the first solar cell. Over 60 years later, solar energy is the cheapest form of energy on the planet, and some solar panel installations even pay for themselves.

Over this past summer, Onsite Energy of Bozeman installed solar panels at Park High. This project has been in the making for several years, and thanks to the time and effort of several Park High students and teachers, the school now benefits by saving an estimated six to eight thousand dollars a year.

Park High teachers Alecia Jongeward and Natalie Storey brainstormed the idea. During an email interview last week, Mrs. Jongeward said, “Dana Baskett did an independent study and wrote the initial DEQ grant and got it. So, the ball started rolling from there.”

Baskett, who graduated in 2019, applied for a grant with the MT Department of Environmental Quality. The $6,200 grant allowed the solar panel project to become a reality.

Over the course of last school year, Park High students, along with Jongeward and Storey, fundraised $102,000 of the roughly $114,000 cost. The money was fundraised mainly through donations from Northwestern Energy, Kendeda Fund, ​Stillwater Sibanye, and Wheaton Precious Metals. Park High must still fundraise $12,000 to fully pay for the solar panel installment.

The solar panels have a lifetime of 25-30 years and a payback period of 20-23 years, meaning the energy savings over the course of 20 plus years will equal the total cost of the panels. When the payback period ends, the solar panels will continue to save Park High six to eight thousand dollars a year for up to a decade.

More information about the Park High solar panel initiative can be found on a plaque installed near the corner of View Vista and River Drive. If anyone is interested in helping to raise the remaining $12,000 for the solar panels, please contact Jongeward.