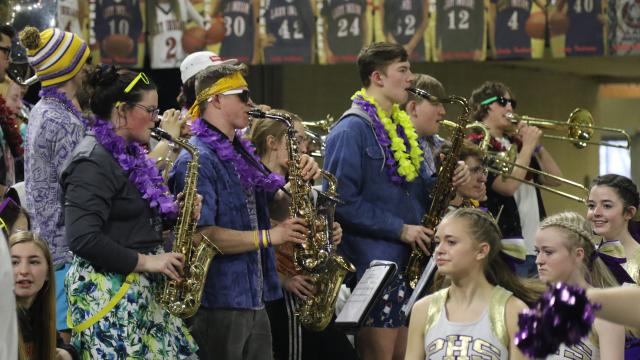 The park high band kept the entertainment going at all the half times and timeouts. We believe them to be the best pep band in the state!

As a senior basketball player, this season was pretty historic in multiple ways. Not only did both the boys and girls basketball teams make it to the tournament this year, which was the first time in over 30 years that both teams had made it together, but the entire tournament was cancelled the day before the true championships were supposed to take place.

The tournament started great for both teams. The boys won their first game against Frenchtown Thursday morning and the girls beat Corvallis Thursday night. This had both teams headed to the semi-finals for Friday which guaranteed them a chance to play on Saturday.

Both the Ranger teams had to play against the Hardin teams. If the Rangers won, both would be headed to the State Championship; however, if they lost, they would each be playing a loser out consolation game Saturday morning to make it to the Consolation Championship that night.

The boys were up first, playing a hard game, but the Hardin Bulldogs shut them down and took the game. As the boys headed back to the hotel with their heads down, they realized that they had a big game in the morning so they needed to get rested up and prepare for their next game against Laurel, whom they had faced multiple times during the season.

As the Rangers rested up,  the girls were getting pumped up; we knew it was going to be special. We had the last game of the night and were trying to get their heads in it before the game.

Two games before the Lady Rangers played, the announcer came on and told the entire arena that Montana High School Association has been keeping close tabs and that there are no cases of COVID-19 in MT. The whole arena erupted in cheers and excitement for this meant that the state tournament would continue and not be canceled.

The Lady Rangers knew that they had a chance for a state title, if they worked hard. The Lady Bulldogs had beat the Lady Rangers twice this season, but each game saw the Rangers improving and that gave them a lot of momentum going into the semi-final.

As we warmed up on the court, our energy was flowing. We were all having fun out there knowing we had made it to this game and that it was about to be a whole lot of fun. As the clock wound down to game time and both teams talked on their benches, the announcer came on yet again. This time, the gym fell silent, he announced that there are now four cases of COVID-19 in MT and that sadly, this would be the last game of the tournament.

Everyone’s hearts dropped. There were some tears, but we knew that we weren’t going to give up yet. As the announcer kept going, the arena was filled with boos for no one wanted the tournament to end. He told the teams and fans that this was the Co-State Championship which meant the Rangers had already played in the co-state championship and now we were about to play in a state championship in who knows how many years.

Coach Megan Burns came close to her team and told us we were in the state championship. This brought a fire and excitement, but you could tell it was still sad. When I was announced, I looked up to my family and smiled. I knew this was the last time they would get to watch as I ran out, said good luck and got pumped up with my team.

As the game went, both teams made key shots and were working really hard but when the final buzzer went off, the Lady Bulldogs were co-state champions of Montana class A basketball.

After the game, I was heartbroken. The fact that we had made it so far this season after a very long journey meant everything to us, and to lose it all to an invisible disease felt like we were being punished and we had no reason as to why. The whole team bawled and when we went out to see our friends and family to find the boys team crying too made it even more painful.

That night will never be forgotten as we all thanked one another for the incredible journey; each senior knew it was time to say goodbye to one huge part of their lives. Sure, we will probably all play again at some point, some are even planning to play in college but it won’t be the same as those high school game days.