All MHSA spring activities will be indefinitely suspended until further notice 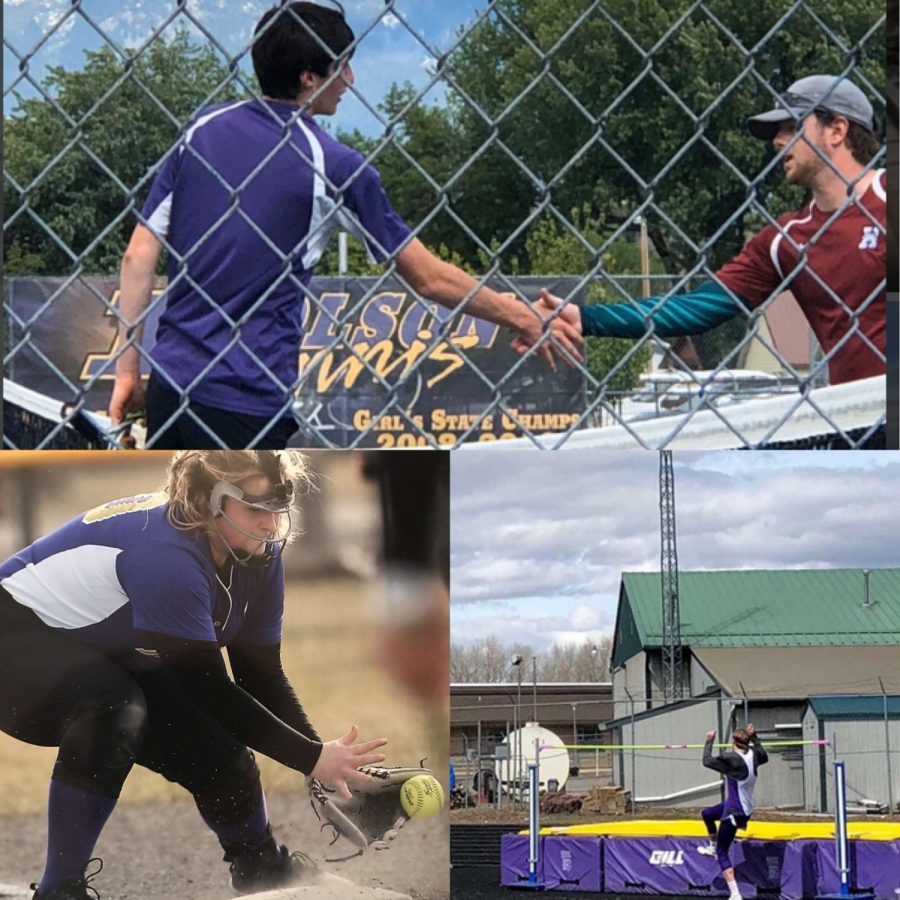 Brendon Johnson (top), Reagan Frantz(left), and Nick Battrick(right), three senior spring sport athletes competing in their junior season which might have been their last.

Spring sport athletes around the state were crushed to hear MHSA release on March 16 that all spring activities will be indefinitely suspended as a result of Coronavirus. This includes practices and contests/meet/festivals. The Executive Board will reevaluate this situation on April 13th and any additional information regarding spring activities will be provided as it becomes available.

It is no secret that the Coronavirus Pandemic has affected the whole entire globe in many different aspects. In this time of uncertainty it is important to stay safe and healthy. Partaking in clubs or sports at this time is considered a hazard and threatens everyone’s health and wellness. Nonetheless it is necessary to recognize the tragic consequence of the virus that has been placed on all spring sport athletes across the nation, especially right here in Livingston to our very own Park High athletes.

No Park High spring sport athlete could have predicted this shocking turn of events going into their first week of practice just a short time ago. This upsetting news affects all three spring sports programs at Park: tennis, track and field, and softball. Every one of these athletes are being robbed of their 2020 spring season, but those facing the most detrimental consequence are the seniors who have no more seasons left.

Park High’s tennis team was predicted to win the team title as State Champions this season, led by strong senior athletes. Sylvie Schoenen, Bobbi Lima, and Brendon Johnson are three senior tennis players who were in the running for state titles this season. All three athletes were coming off of a successful junior season; Johnson placing 1st in singles at the Divisional Tournament, Lima placing 2nd in singles at the State Tournament, and Schoenen placing 5th in doubles at the State Tournament.

Schoenen has also signed with Arizona Christian’s tennis program this past winter. Assuming that the spring sports season is unable to resume she will be missing out on the opportunity to claim the State Championship she was in the running for. Schoenen expressed, “It’s heartbreaking to know that my season could be cut short or taken away especially with the likelihood of my doubles partner and I winning the State Championship.” Schoenen continues to go down to the tennis courts daily to work on perfecting her game.

Park High’s softball team is also at a loss with this development. The team sported three Park High seniors, Haleigh Gilliam, Scarlett Saile, and Reagan Frantz, who received All-State honors her junior season. Gilliam expressed her disappointment. “The seniors on our team are very close and it’s sad we cannot play our last year together.” Gilliam then continues, “. . . to know that I may never play competitive softball again breaks my heart.”

This season was looking strong for the Lady Rangers, coming off a strong season last year and the new change of co-oping with Big Timber this season. Frantz, who is a prominent leader for the Lady Rangers and has put in many hours in the off-season, admitted that she is still working hard on her own during this time off and so is the rest of the team. Frantz said, “The whole situation is up in the air but Park High softball still has the drive and determination to play on the field.” Frantz is confident that if the season were to resume they would take 1st in the divisional tournament and put a year on the softball banner.

Although the senior roster for Park’s track and field team this season was small, the potential of the individual athletes was large. Nick Battrick, David Durgan, Ryleah Floyd, and Brylea Beye were all looking at a run at state this year, some even placing. Durgan, an avid long distance runner who is the longest standing senior member having participated in track all four years, said, “I was hoping to be all state this year and would definitely miss not having a track season.”

Battrick also spoke of his high expectations for the season, “I wanted to place at divisionals and state in every event this season but that can’t really happen now.”

For the girls, Floyd found her groove in running hurdles last season and was only a couple seconds off of qualifying for divisionals. This season she was confident that she would have made the cut off and even excelled onto state. Floyd said, “It’s pretty heartbreaking to not be able to compete just one last time. I’d really give anything to run with my hurdle crew one last time.”

It is still unknown what is to come of this 2020 spring sport season; however, with almost a month of it gone already athletes are losing opportunity everyday. The seniors hopes are high that this is not the end, but only time will tell.