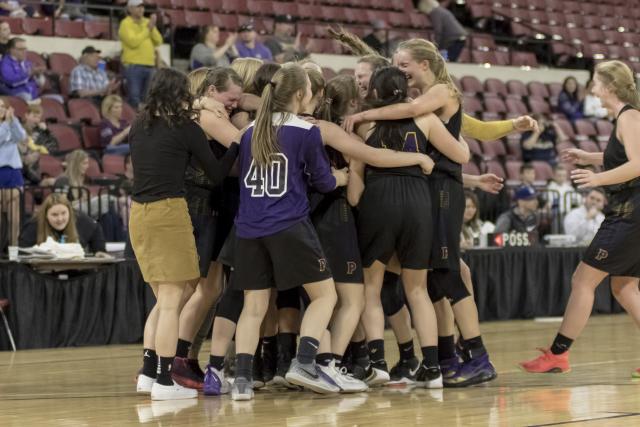 Lady Rangers celebrate an emotional win against the Laurel Locomotives, securing a spot to state for the first time in 12 years.

After 12 long years, the Park High Lady Rangers have made it back to the State basketball tournament. With seven seniors, four juniors and four sophomores, the team worked hard all year to make it to where they are now.

The Lady Rangers started the divisonals tournament with a convincing 63-27 victory against the Miles City Cowgirls. They went into their second game in hopes of keeping the momentum from their previous win. However, the Havre Blue Ponies,the two-time defending state champions, came out with some fire of their own and beat the Rangers 59-32.

With their first loss of the tournament, the Lady Rangers entered the consolation bracket needing two straight wins to reach state. The first win of the consolation games was a hard-fought victory against the Sidney Eagles on Friday morning by a score of 39-35. Throughout the game, the Lady Rangers battled and never gave up. This is a key point that Coach Megan Burns has said about her team often.

“ Even when they know they are going to lose, they never give up. They never stop playing defense,” Burns said as she talked about her team. She also mentioned that during the Sidney game, “I think we definitely could have played better but we played well enough to get the win. They had their eyes set on state so losing that game just wasn’t an option.”

With the victory against the Eagles, the Lady Rangers had only one game standing between them and state. However, it was against the Laurel Locomotives who had swept them in the 2019-2020 season.

“Through the season we’ve continued to get better each month. The girls continued to gain confidence and slowly throughout the season they competed better against better teams,” Burns continued, adding that losing their second game to Laurel by only eight during the season gave them confidence that the Rangers could beat the Locomotives.

Going into the game the Rangers knew that they would have to play their hearts out. The Rangers came out hot with the first quarter being 12-7 Park. From the start of the game, the Ranger’s defense was phenomenal; they frazzled the Locomotives with strong pressure up front, preventing Laurel from scoring big.

Going into the second half of the game up 14-8, the Rangers struggled to maintain their lead. At the beginning of the fourth, the Rangers were down 18-19. A game-changing fourth quarter led the Rangers to state. They outscored Laurel 19-10 and continued to play great defense for the rest of the game. The Rangers beat the Locomotives 37-29, securing a spot to the state tournament for the first time in 12 years.

From day one, the Lady Rangers set a goal for themselves this season, “State 2020.” That is where they wanted to be and they never gave up on that goal. Burns is proud of her team, but she says they aren’t done yet. The Lady Rangers play the Corvallis Blue Devils at 8 p.m at the Metra on Thursday night, March 12.