Speech and Drama ends successful season with sense of family 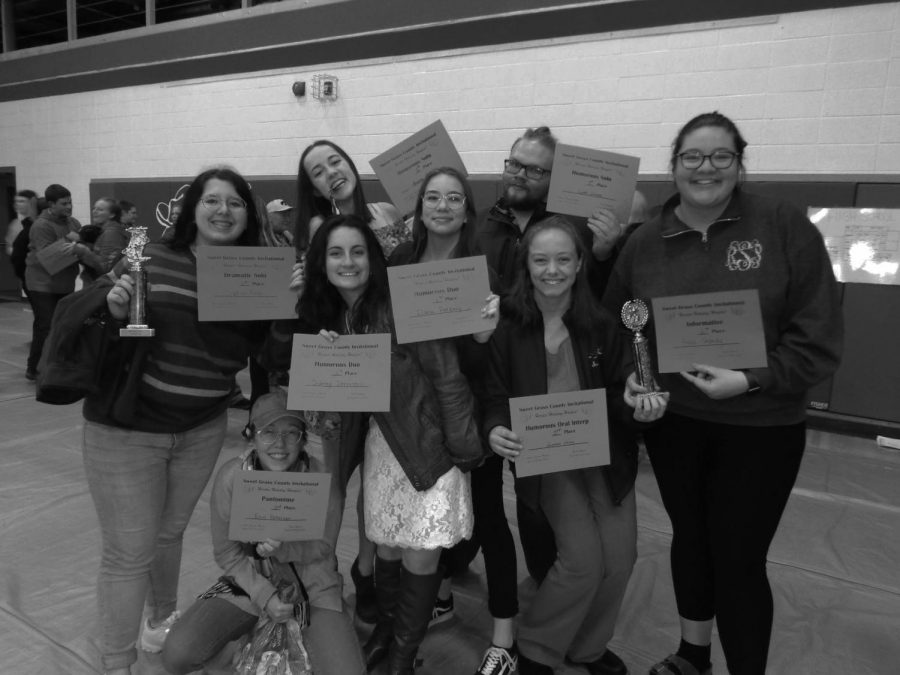 With their fun filled season ending in January, the Park High speech and drama team finished events out at state in Whitefish. At the end of state, the students came out with multiple successes. Eleven Park High students accomplished making it to state with six making it to semifinals and many placing in the top 4 of their event.

This year’s team was more successful than years past because more students participated. We had a successful season because we have kids who are trying new events, said Keaton Ramm, one of the speech and drama coaches. “The seniors have done a good job encouraging and challenging everyone. Kids have come back and grown. To see that happen has just been awesome,” said Ramm

A community of students and coaches is being built by the speech and drama team at Park High School. For Brianna Pittman, a senior member of speech and debate, her favorite part about being on the team is how they become a family. “Our team is diverse and each and every individual, no matter their experience or rankings throughout the year, is a part of that family,” said Pittman.

The speech, drama and debate team is just like any other sport with a season that starts in October and ends with state in January. Ramm said the team was composed of 14 students by the end of the season. Ramm said there are 17 different events that students pick from for their one event. Speech and drama is a lot of time and work, so the Park High coaches only allow the students to choose one event to focus their time on.

Every Saturday of the season, the team attends meets around the state where they compete multiple times in a day against 10 to 20 other teams. This is a very structured event so that no one’s performance is altered by distractions.

“This season was incredible. I had a first at every meet except for three, even then I had second, fourth and sixth. I got first at divisionals which was dope,” said Erin Peterson, a senior speech and drama team member. Erin competes in the pantomime event which is the acting out of invisible objects in order to tell a story while being precise and deliberate.

The team had many successes this season in many different events. Sophomore Reba Shandy said “I am the first informative category speaker at Park High. I worked very hard to pave my way and try something new. I was the youngest person in our class A conference and I took third at divisional and made it to the semifinals at state.”

The growth of the team comes from the support that each member gets from their teammates, their coaches and their families. “Miss Ramm helped me so much! I believe that she helped me get as far as I did this season,” said Shandy. “She constantly lifted me up when I didn’t think I could do it, and she kept me grounded when I needed it.”

Peterson communicates that her teammates and coaches are like a family and they built her over the four years of participating in speech and drama making it a sad year of lots of goodbyes, but she is incredibly thankful for all the connections that left a handprint on her heart.

“I am so thankful for my former coach Kari Blaylock and my current coaches Addie Pittman and Keaton Ramm. They have done so much hard work for us. They have helped us pursue our passion and they see the larger picture of being part of a team and what it means to each of us,” said Pittman.

A coach is an essential part to a team and their successes. Ramm took over the team in 2018 after Kari Blaylock, the coach that brought back the program, left the district. This is Ramm’s second year coaching this team with the help of Addie Pittman. “The team was in danger of not continuing and no one was interested in stepping up,” said Ramm. Ramm states that she feels speech and drama is just as important as other activities, such as FFA, because it’s building leadership skills, supporting kids and challenging them to grow. Before jumping in to coaching this team, she didn’t know what it was or how it works.

Members of the team strongly believe that if you’re looking for a place to feel welcomed and watch yourself grow, this is the activity to join. “If you’re interested in improving acting skills or sharing a speech about something you’re passionate about, speech and drama is the perfect opportunity to do just that,” said Pittman. Shandy believes that the speech and drama team is a great place to meet new people, learn more about yourself and have so much fun.

“Students develop the most important skill to have – communication,” said Ramm. As the coach, Ramm knows that this activity allows for students to have a lot of creativity and growth in their communication skills.