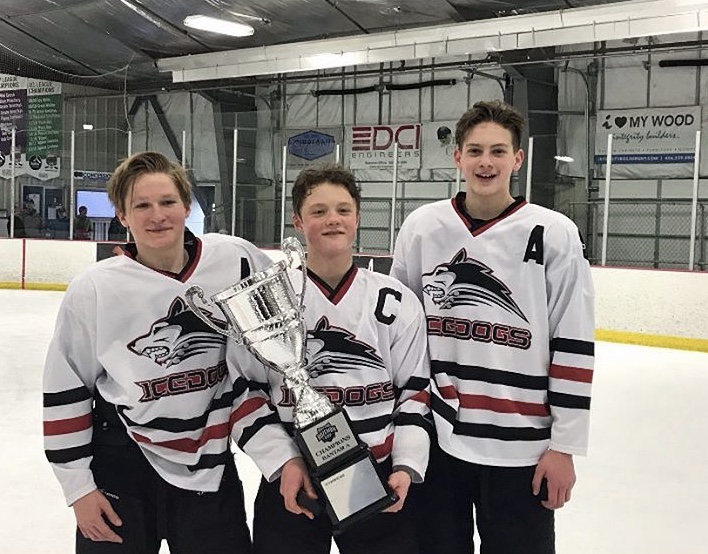 Hockey is a sport that does not traditionally get as much coverage or attention, because it is not affiliated with the high school.  However, opportunities still exist for those who wish to get involved in this sport. Over in Bozeman, there is a hockey team for high schoolers called the Bozeman Ice Dogs.

The team consists of 22 high schoolers from the Bozeman area.  Four of those players are from Livingston. The players include Sophomores Carter Bartz, Liam Higgins, and Bodie Shepardson.  Bartz is a forward, and Higgins and Shepardson both play defense. The other player from Park High is junior Brandon Mickelson, who plays defense as well.

Freshman Bodie Shepardson has been playing hockey for eight years. He enjoys the sport, and his favorite part is “hitting people hard.”  This last weekend, Shepardson scored three goals while playing defense. “You miss one hundred percent of the shots you don’t take,” Shepardson commented.  Shepardson’s goal is to play D1 hockey in college, “and then hopefully on to the NHL,” he said, despite laughs from all of his friends.

Carter Bartz was very optimistic for this coming season as he talked about it.  The team has already started their competitive season, playing their first two games on the weekend of October 26.  The team started out strong winning both games. Their season will run until the end of April, making it one of the longest running sports seasons besides baseball.

Hockey takes a large time commitment, especially for those driving over from Livingston every day for practice.  Bartz says that he practices three times a week, as well as attending hockey tournaments all over the Northwest region.  The four from Livingston travel with the 16 and under group of the team.

Last year the team attended Nationals, and Bartz hopes to keep their streak alive.  Bartz explained that to make it to Nationals, they have to beat the other double A team in the state, which is Whitefish.  If they win in a head to head match, then their team wins a trip to Nationals, which this year is in Troy Michigan, in April.