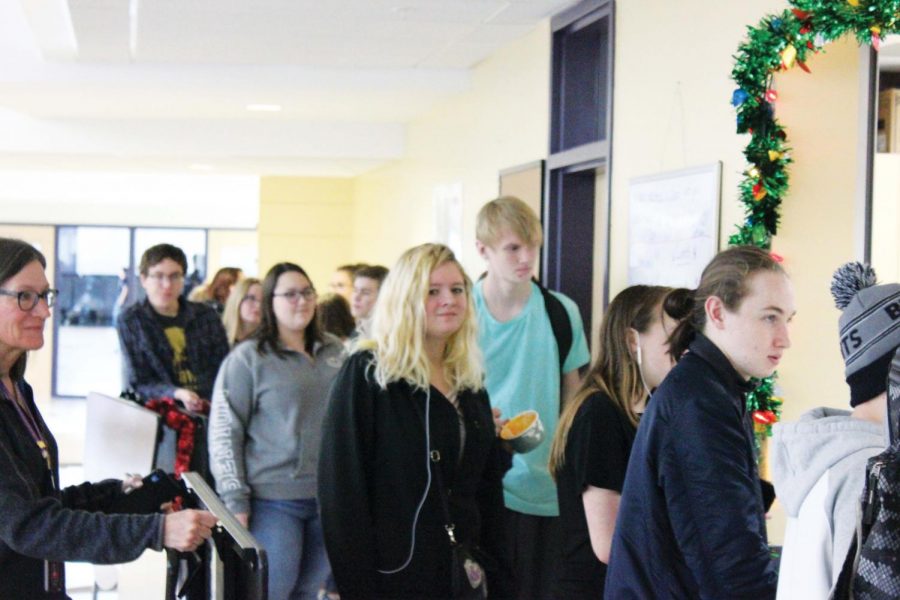 The 35-minute crunch; the most hectic time of the day. People go flying out the doors and to their cars, others rush to grab their books to cram study. Then there’s the ala carte line. They wait. While the school has a perfectly well-prepped and diligently made lunch waiting to go, many students choose to wait in a usually longer line for the same thing they had yesterday, a bag of chips, grape Uncrustable, and two Peace teas, or something like that. But why is that? What makes the long lines worth the wait for many kids?

Carla Jones, the woman in charge, says that she’s been running the carte for about nine years now after working at the 49er. She inherited it during the remodel, so originally, she was by the dish drop on fold-out tables. Then it moved to the hut it has now, and that always been Jones’ spot.

She credits its success to her personality saying it’s, “Because I’m a weirdo.” In addition, she takes the responsibility of being the first-person kids see in the morning, and she chooses to be happy regardless of the mood she’s in. “I don’t know what goes on at home with those kids and regardless of how I feel in the mornings I feel I should be a positive (person).” “Plus, I want them to eat. They’re more likely to come and eat if I’m friendly.”

It’s no secret kids wait a long time for Ala Carte, but Jones has no idea why. “Food isn’t that darn good,” she says. She might have an explanation for the type of crowd she gets though. “A lot of them are the freshmen because they can’t leave campus.” While she gets a fair amount of each grade every day, the freshman are the people who show up consistently.

Teagan Killorn, a senior, worked with the kitchen staff for a semester last year, and she noted the long lines, “It goes fast in the booth but probably not for the lines,” she says. The line method has left some people bitter feeling like children who need to be watched over, but Killorn believes, “It looks silly, but it’s a really good idea, I feel. I’ve been in the Ala Carte line before too and it’s annoying when people budge.”

The normal kitchen, despite shorter lines, stay very busy. Killorn reflected on her time there washing dishes, “We do everybody’s dishes and cook everybody’s meals and sometimes were understaffed.” Because the school oversees food for the whole district, when people are sick in other kitchens, our staff go to lend a hand.

There is a possibility of opening the other side of the hut, but Jones knows that they only have one computer, and it could be hard to get another. Killorn worries that the line to Ala Carte and the normal lunch line would get mixed up.

Actually, Ala Carte’s success is very important because “The more I sell over here, the more it helps the main kitchen with keeping the prices down.” she says. This helps kids on reduced lunch keep that price affordable.

Deciding what is cooked at Ala Carte every day is up to Jones and Jones alone, but by the time the morning rush is done, she often doesn’t know what to make for lunch. “That’s why sometimes you see a little question marks up there in the morning because I’m like uhhh…” Killorn says that sometimes, despite what Jones makes, “Some people every day, you know their orders.” She also thinks, “Sometimes the Ala Carte has more (things that) interests people’s preference more, I think people like options.”